Back in the fall, I received an email from Gwen Plunkett, an artist from Houston who uses encaustic. She invited me to join her newly formed encaustic group in Houston. She said that they were considering becoming a chapter of IEA but weren't sure.

I was excited about the prospect of a Texas-based encaustic group. I had intended to start one but just hadn't gotten my act together enough to do it. Gwen's email finally got me going. We decided to create one Texas group with separate groups in the larger cities, starting with Dallas and Houston.

Gwen mentioned that she's going to be in Dallas for the annual CAA conference and perhaps we could get together. There are some encaustic-related things going on in conjunction with the event. We decided that we would try to find a place to have a group encaustic show in the vicinity of the conference.

So I emailed all of the artists who had taken my workshops over the years and invited them to help form our encaustic group.

We met this past Saturday at the home and studio of Janet Reynolds. There were nine of us: Deanna Wood, Pedrameh Manoochehri, Darlyne Hartman, Kathy Lovas, Susan Sponsler Carstarphen, Silvia Thornton, Janet Reynolds, Junanne Peck, and Trayc Claybrook.

There are several others who are part of the group but weren't able to make the meeting:
Vidya Kagal, Charlotte Cornett, Cheryl McClure, Robin Walker, and Fran Strebel.

We came up with the name - TexasWAX/Dallas - talked about the focus of the group, affiliations, etc. We're currently looking for exhibition space for a joint Dallas/Houston show during CAA.

I'm very excited about the group - it's a diverse, talented, supportive and encouraging group of artists.

You can keep up with our progress on our blogs:
TexasWAX/Dallas
TexasWAX/Houston

We're looking for artists who use encaustic in San Antonio, Austin, Corpus Christi, etc...
Posted by Deanna at 11:19 AM 2 comments:

...where I continue my campaign to ban packing peanuts. 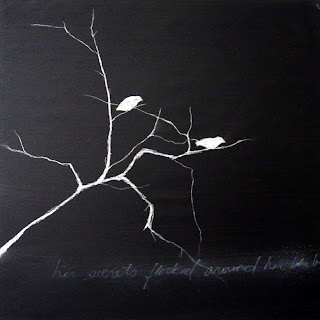 Her Secrets Flocked Around Her Like Birds
11.5" x 11.5"
oil on paper on panel with pastel
2007
I just sent a painting off to a show and even though it was just one painting and it seemed like anyone could have done it with no problem, I decided to make a sheet with unpacking and packing instructions. I learned my lesson back in the summer...

Here's a screen grab of the unpacking instructions: 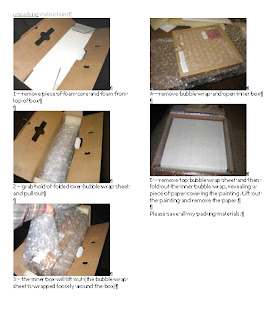 I try to follow all the rules for successful packing:
- 2 boxes (painting wrapped well and snug in inner box, inner box snug inside sturdy outer box)
- no peanuts (I complain about peanuts all the time - even the environmentally friendly ones - they're a complete pain in the ass*)
- everything is loosely packed with minimal taping to avoid someone having to fight to get something open...
- I draw arrows and write "open here" to indicate where I want my box opened
- I write my name on all sides of the box

I like to pack the box and then unpack to make sure it's easy. I take photos of each step and then I create a simple document with the photos and easy to follow steps for each photo.

In this particular case, I was only shipping one painting, so I used a custom-made cardboard box that was lined with small bubble wrap. I put a piece of archival paper on top of the painting to protect it from the bubble wrap. It rattled around a little when I tested it, so I taped some bubble wrap to the sides and top just to make it a little more snug. Then I wrapped that inner box with large bubble wrap.

My outer box was actually a super sturdy, cow-spotted Gateway box (with a handle, even!) that I spied in the trash at my last job. It was the perfect size. I lined that box with some foam and then slid the bubble wrap-wrapped inner box inside. I placed more foam on top and a sheet of foam core for extra protection. I liked the handle, but decided to remove it in case it got hung on something in transit. I taped some cardboard over the hole for extra protection.

I'm in the middle of unpacking boxes now for a show. The artist's galleries are shipping his work to our local art center. I'm very disappointed in their packing! Well, they're actually packed really well, but not for re-use. I suppose galleries are used to shipping things out and not worrying about getting them back... Most of the paintings are wrapped with paper (which is good), but they're heavily taped (which makes it hard to remove without shredding the paper), then they're wrapped with bubble wrap (which is good), but then heavily taped again (same problem - I have to cut it and mangle the bubble wrap), then (God help me) the boxes are FILLED with peanuts. Today I worked for 2 hours and spent a good 30 minutes of that time wrangling peanuts...

*Enough with the peanuts. Seriously, people.

Sorry. Just had to vent!

Anyway, I can't say this enough - if you want your work to come back safe and sound, think about how easy it will be for someone (most likely an unpaid volunteer who might not have any experience handling artwork) to unpack it first and then re-pack it later. The more they have to wrestle with your tape, bubble wrap, peanuts, etc., the more likely it is that they will not re-pack it well.

As someone who has unpacked several national juried shows, I appreciate artists who send packing instructions. It might seem kind of OCD or anal-retentive, but it really makes life so much easier.

By the way, I shipped the above painting to Eastern Kentucky University for a show called Space, Life, Place. It will be on display January 23 - February 29, 2008

During the year that Ze Frank was doing "The Show," his daily online video program, he created an online social network called the ORG. It was a place for his fans (with various nicknames like Sports Racers, Duckies, The Flock, or members of the League of Awesomeness) to congregate, celebrate their love for Ze, contemplate why he never blinked, show off their creative work, and collaborate with each other.

I had been contemplating writing a post for this blog about online social networks for artists and I was going to mention the ORG. I don't see the point for most of the networks - I join them (myartspace.com, 723.com, artscuttlebutt.com, indiepublic.com, etc), post some images of my artwork, look around at other members for a while, log off, and forget about it until someone posts a comment or friend request.

But the ORG was different. It wasn't an art social network per se, but a lot of the members were very creative in some way - artists, musicians, poets, writers, photographers, filmmakers, designers, illustrators, etc. And others were scientists, engineers, students, and self-described geeks and nerds. The thing that brought everyone together was a desire to connect with other like-minded people and create something new.

ORG members could post photos, videos, writing, and links to their blogs. Members were encouraged to leave short, positive comments. You could also send messages to members via the ORG's message system. Oh, and I don't think I mentioned what I liked most about it - it looked really good. The complete opposite of MySpace, which is so full of ugly (on many levels) that I can't even begin to describe my loathing...

And it all seemed to develop and grow organically. It started very basic but as people commented on the features and functionality, new things were suggested, added and tweaked all the time. It was fun to watch it grow.

One of the collaborative aspects of the ORG were the projects. Any member could create a project and invite other members to join in. Some were based on things Ze mentioned in his show and others just came out of nowhere and got a life of their own. Often someone would post a photo or video, other people would connect with it, play off of it, post something else, and something new and wonderful would be born.

I have to admit that I wasn't as active an ORG member as some. I don't know how to do video (and quite frankly don't want to see myself on video!). I mostly posted some photos, perused the photos that people posted and commented on them. I would "quack" at people (I guess it was the ORG's version of a nudge, wink, or friend request). I would read some of the blogs and occasionally watch a video. There was one young guy from New York that posted some beautiful poetry... Oh, and I really enjoyed the Secret Santa project this Christmas...

OK, so why am I in mourning? Because when I tried to log in to the ORG on New Year's Day, I saw this:

It had became a real community. I felt like I had some friends there. I was a fan of many members and looked forward to their contributions - dangeramy, oldgrimy, viscousplatypus (still the best username ever), astropixie, imagine, blissee, awed job, snooge, ohkatherine (incredible photographer)... So many! A bunch of the ORG members are planning a get-together in Chicago this March at QuackerCon 2008...

Luckily I had some ORG member emails and some ORG contacts on Twitter and Flickr, so we were able to stay in contact while we figured out what happened (in fact, I've been enjoying our Twittering these last few days...)

Some of the more industrious (and smart) ORG members are scrambling to create a new place to meet. Right now it's called PostORG. ORG members are coming together and offering their talents to help create something new.

There was discussion on the forum about trying to get the code for the ORG to bring it back up and have someone else maintain it. But I love the idea of us creating something new. And of course by "us" I mean all those smart people who know how to do that sort of thing...

So if you were a member of the ORG and want to reconnect with it, go to PostORG or send an email to explodedorg@gmail.com.

Or if you want to be part of something new and awesome, watch The Show first, and if you like what you see, then hop on board.

And if you do join, look me up. I'm enchiladaplate, of course.
Posted by Deanna at 9:12 AM 4 comments: