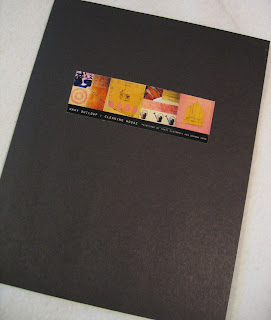 I had a very productive day today. I worked on putting proposals together for the Waxy Buildup exhibit. 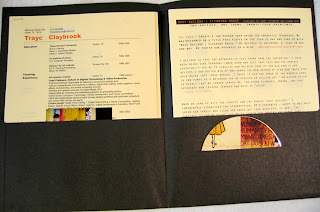 I made a few minor changes after I shot these images, but it's basically how it looks. I included our resumes, a CD, an image list that corresponds to the images on the CD, and a statement. This image shows a postcard, but I ended up not printing them because the prints off my computer scratch too easily. I want to get some professionally printed postcards to include in future proposals. 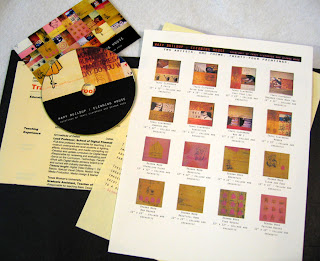 Each packet also includes a cover letter and a SASE.

There's one packet that I had to customize because the venue had really specific proposal guidelines. You have to do that sometimes, so it helps to be flexible.

I also entered my work in a couple of juried shows and put together a packet of my work to send to a curator.

I've got some new stuff going on in my studio but I'll talk about that later. I'm still trying to figure out what's going on with it.

Wow! That's awesome. Good for you.
And thank you so much for sharing your process.
:)

Deanna, the portfolio looks fabulous. It's been awhile since I did it but I used to put little thumbnails on my slide sheet pages, too, when I sent slides. I always hoped it help clarify things for the person looking at them.

Good luck with the proposal.

your presentation looks beautiful... big good luck on getting a show!

P.S. Your blog is very wonderful

Nice job Deanna! It looks so professional. I'm trying to get my own proposals together for a few new galleries and you've inspired me. Great luck to you with the submissions, but the work is beautiful so I'm sure you'll have success. Take care, Linda

Out of the ballpark, Deanna! A high flyer over the fence!
I am having trouble getting my art to print right in brochure/flyers at the printer! AArrghh!
You are my new guru about all things art packet and beyond. Thank you for sharing everything.