I wanted to blog about the other pieces I created for my commission, and this is the second on that I worked on. 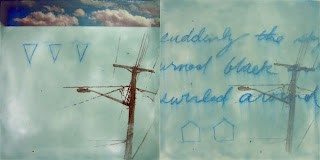 The original piece is two 12" x 12" panels that I created about 5 years ago, while I was in grad school.

This piece was by far the most difficult. Nothing worked out the way I had originally planned it. Plan A was to glue down a color copy of clouds, do solvent transfers of the telephone poles onto the panels, paint clear wax on, collage in a large piece of tissue/rice paper with the triangles and words, and then add some transparent blue wax.

Well, the large copies that I had made for me wouldn't transfer with the solvent. I had done a test with a copy I already had and it worked. So maybe they changed the type of machine they used or they type of toner, or something. But it worked as a transfer directly onto the wax (without solvent), so I decided that I would do that. 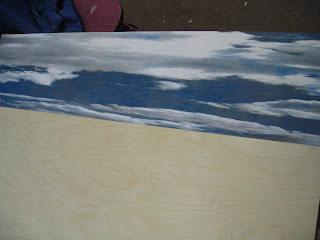 Lots of other things didn't work, either. The large color copy was way more than I wanted to spend, so I got a black and white copy and colored it with colored pencil.

I also had a problem collaging in the paper. The only paper that I could find that was large enough to cover the whole panel was apparently not absorbent enough, because it didn't soak into the wax like I needed it to. It just made a big wrinkly mess. 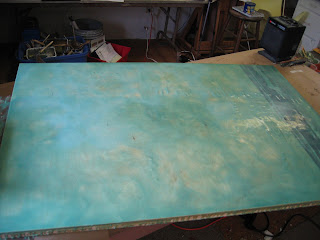 And the transparent blue wax didn't work. As I mentioned before, working large in encaustic is definitely a challenge. I couldn't get the surface to look smooth and even like I wanted it to. I just didn't like the way it looked. So I scraped it off. From both panels. 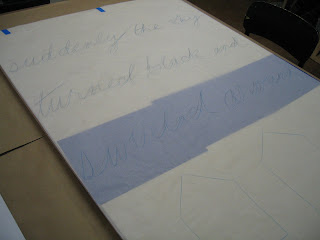 Here you can see how I transferred the words to the right panel. That's the tissue paper that I was originally going to collage in. I used blue transfer paper to get it on the panel. Then I wrote over it with a blue colored pencil.

I then covered both panels with clear encaustic medium. It was much easier to get the clear wax smoother. Or maybe the unevenness just wasn't as noticeable with the clear. 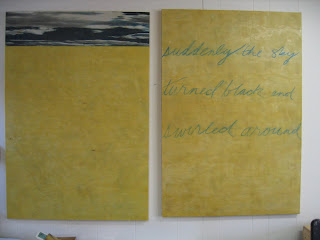 Here are the panels with several layers of clear wax added.

So then I did the transfers. I have good transfer karma, for some reason. I have friends that have tried and tried to do transfers (solvent or wax), and can't do them at all. So these large transfers weren't hard, just time consuming. The paper really stuck to the wax, so most of the labor involved wetting and rubbing the paper off. 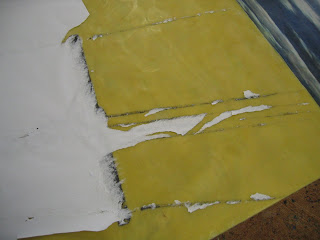 Here's what it looks like after I've burnished the transfer and I'm rubbing away the paper that has stuck. 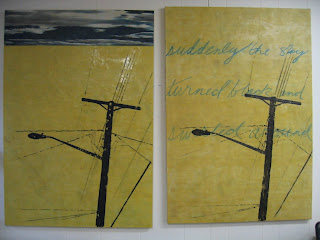 And here are both pieces with the tranfers. I couldn't really make the one on the right lighter like it is in the original, but I tried to make it rougher and less dark. I even sanded away a little bit of the toner. 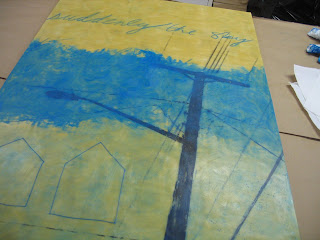 Instead of using the blue wax, I decided to rub a thin layer of oil paint onto the surface. I scratched the triangles and the houses into the surface using a needle tool and rubbed the oil paint into the scratched lines, and then continuing over the whole surface. If it got too heavy, I would add some linseed oil to a paper towel and rub some of the oil off. 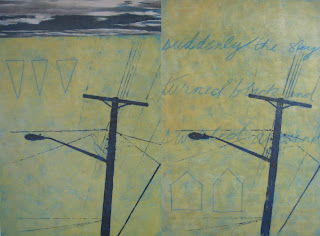 And here's the final piece. I like the way it came out, even though I think it's different than the original.
Posted by Deanna at 2:39 PM

Interesting account of your process. Good to see what happens when a road block occurs.
I just got some of the parchment paper for doing transfers on encaustic. Best using a laser printer. I have an ink jet and it did ink the parchment but very lightly. It did transfer and very easily. It was suggested to me to take the images and paper to Kinko's and see if they will do the printing with their laser printer. Paper comes in large sizes too, though mine is for 81/2 x 11.
I will try that.

Nice series, Deanna! You're right about working large. It's fascinating to read about the challenges that came up and how you dealt with them. More, please!

Very nice job and interesting technique. Its always cool to see small studies in project we do in school, become something so much larger.

Lovely results. Thanks for describing your process -- I find it so interesting to hear how artists achieve their results. Things that DON'T work are the best teachers, aren't they?

Love seeing the process, Deanna.......and the work is stunning.

Really interesting. I love your work and the process looks so full on!! I would now love to find out more about encaustic processes. Can I buy it from art shops?

Do visit some time.

Thanks for sharing, your blog is worth reading, nice post. Keep it up.

wow, I enjoyed looking through this, we all encounter the bumps don't we? Yes, I agree about working bigger!

I don't know alot about encaustic art, so this is really interesting to me to see your process. Lovely work! Thanks.