Just wanted to post some info on recent shows. I'm noticing a lot of artist book activity lately and I like it! 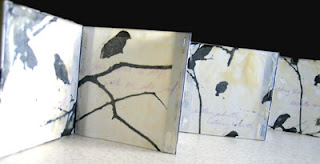 I created this book specifically to enter in the show. It seemed serendipitous, as it fit into my recent body of work so perfectly. I will definitely be doing more books as part of this series. 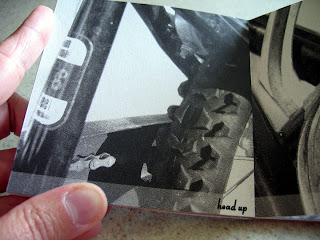 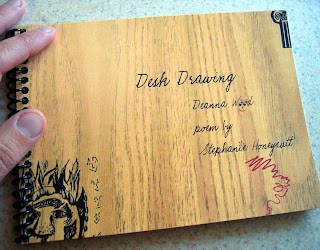 My friend Beth Honeycutt, who is a member of the Poets' Assembly, gave me some of her poems to read, as well as her daughter, Stephanie's. I was drawn to one poem by each of them, and created the artist's books pictured above. Beth wrote a poem in response to one of my paintings.

More images of Desk Drawing and Bicycle Andante in this Flickr set.

One last artist's book-related event - I'll be speaking about artist's books to the Dallas Area Fiber Artists on April 28, at 7:15 pm at CC Young Cultural Arts Center Auditorium, 4829 Lawther West, in Dallas. I'll also be doing a mini workshop before the meeting.

I'll be speaking to the Women of Visionary Influence Artist Ring about my path as a full-time artist on Wednesday, April 9, 9:30-11:00 am, at la Madeleine on Belt Line and Montfort in Addison.

Glad I found you at this site! Wow! Very inspirational!

I am in awe of your blog which I just stumbled upon 1 hour ago....and I have read every post!!! You are the best!! Thank you for your time and effort in making all this dizzying info available to us....Okay, now..I am going to check your artwork next!!! Bravo!