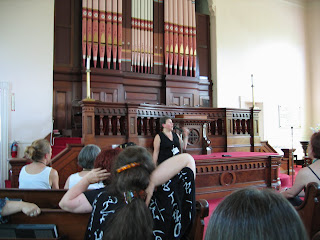 The blur that is Joanne Mattera...
I'm still processing all that I saw and learned at the Second Annual Encaustic Conference. Joanne Mattera and the staff at Montserrat College of Art did a fabulous job of organizing the conference and keeping it lively and interesting.

I need to read through my notes and sit down and do a more thorough wrap-up later.

I also spent a day in Boston roasting in the heat and taking in some mercifully air-conditioned galleries. I will also try to do a summary of what I saw there.

I took a $15 bus from Boston to New York (how is that possible?) and arrived in Chinatown. Then I took a $20 white-knuckle cab ride to the hostel where I'm staying.

OK, so it turns out staying at a hostel is a lot like camping. I hate camping. But it's cheap, so I'm going to make the best of it.

So after checking in and getting settled in, I started wandering around. Central Park is just a couple blocks away, so I started there. I was thinking maybe I'd walk to the Met, but realized that Central Park is BIG! So I thought I'd try to find where they perform Shakespeare in the Park and maybe take in a show, but I couldn't find it.

I decided to just head back to the hostel, grab something to eat, and do some laundry. But as I was walking out of the park, someone handed me a flyer and said, "Come to our performance!" Turns out it was a Shakespeare play by the New York Classical Theatre, and they were doing it right there. It was a "progressive" performance, where they would move all over the park and perform scenes in different locations. At the end of a scene, one of the characters would say, "To Britain! Come on! It's just across the bridge!" Or something like that. It was really fun.

So today I'm thinking of hitting the Met and MoMA. And then tonight I'm meeting some internet friends at David Byrne's musical building.

Hopefully it won't be as hot as it has been.
Posted by Deanna at 7:27 AM