Here are some photos of the books I've been making. I finished an altered book, worked out the dummy on a flag book, have the basic idea and form for a small stab book (or series), and am still going strong on those embroidery books that I mentioned earlier. 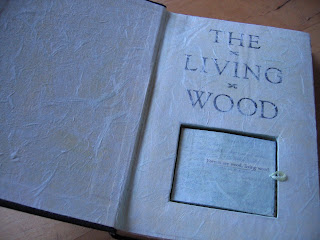 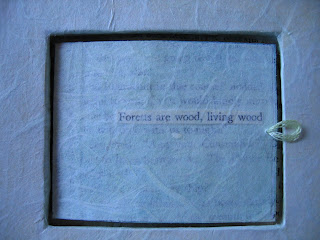 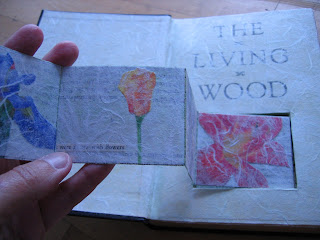 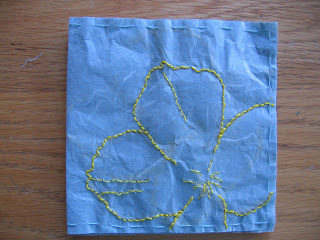 One of the embroidery books.

I also worked a bit on some drawings that I will collage into encaustic paintings when I get back. 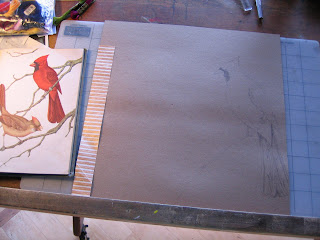 I had a bit of a detour on Thursday - Laura wanted to go to some openings in the city, so we drove back in that day and came back on Friday. We stayed at the beautiful brownstone in Harlem that she and her husband are remodeling, went to 3 openings (without air conditioning!) and then had dinner at a place called Hell's Kitchen.

The next day we went to an awesome art supply store called New York Central. I got some really great paper to use for books when I get back.

Then we went to PS1 to see the Olafur Eliasson show. He's the one that did the waterfalls around the city. He also had some work at MoMA that I had enjoyed.

So it was fun to go to the city again. It was a bit intimidating driving, though. Laura directed me. Actually, she mostly said, "It's OK. Just go!" Luckily I didn't have to drive very far - we just parked at her place and then took the subway, taxis, and her husband drove some, too.

Anyway, the time here is almost up. It's been really fun and inspiring. I'm almost ready to get back to the real world. I've got a lot of work to do when I get back!
Posted by Deanna at 1:40 PM

Excellent Blog...glad I found a new source for checking out what's new and hot in the Arts...Thanks for writing good content!!!

I love the tree book. I like that there's a book within the altered book.

I have enjoyed looking through your blog and just had to comment on this exquisite little beauty you have here. This lovely book within a book...its just 'dinky' - inspiring. I look forward to seeing more from you and hope you enjoy getting on with some artwork once you are settled back home after your soaring residency.

I keep coming back to look at the images of this hand-made book - I'm looking at making some myself and this is a great inspiration.